This article is intended to provide the reader with an introduction to two technologies,  EMC FAST and NetApp FlashCache. Both of these technologies are intended to improve the performance of storage arrays, while also helping to bend the cost curve of storage downward. With the amount of data that needs to be stored increasing on a daily basis, anything that addresses the cost of storage is a welcome addition to the data center portfolio.

EMC FAST (Fully Automated Storage Tiering) is actually a suite made of of two different products. the first, called FAST Cache operates by keeping a copy of "hot" blocks of data on SSD drives. In effect it acts as a very fast disk cache for data that is currently being accessed while the data itself is being stored on either 15K SAS or 7200 RPM NL-SAS (SATA) drives.

FAST Cache provides the ability to improve the performance of SATA drives, as well as to turbo charge the performance of fiber channel and SAS drives as well. In general, this kind of technology helps to divide performance from spindle count, which helps drive down the number of drives required for many workloads, thus driving down the cost of storage, and the overall TCO of storage. 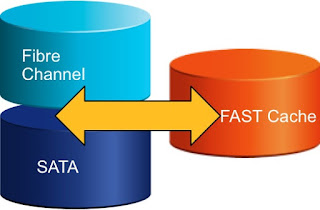 The other product in the FAST suite is FAST Virtual Pool.  This is the product that most people associate with FAST since it is the one that leverages  three different disk technologies, SSD, high speed drives such as 15K RPM SAS, and slower high capacity drives such as 7200 RPM NL-SAS. By placing only data that requires high speed access on the SSD drives, data that is receiving a moderate amount of access on the 15K SAS drives, and putting the rest on the slower, high capacity disks EMC FAST is able to drive the TCO of storage downward. 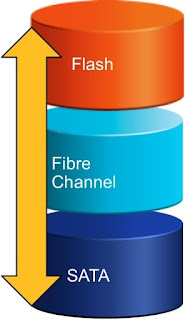 NetApp approaches the overall issue of improved performance while simultaneously driving down the TCO of storage in a different way. NetApp believes that using fewer disks to store the same amount of data is the best way to drive down TCO. Therefore NetApp has spent a significant amount of time developing storage efficiency tools to help their customer's store more data in less space.  For example, they developed a variant of RAID-6 called RAID-DP which provides the protection and performance of RAID-10, while utilizing significantly less space. NetApp has also developed block level de-duplication which can be utilized with primary production data.

However, as with many technologies of this type there could be a performance penalty paid for it's utilization. Therefore, Netapp needed to develop a way to improve the performance if it's arrays while also supporting it's storage efficiency technology. With the advent of Flash memory, Netapp found a way to do this without any need for significant changes in the architecture of it's arrays. Thus was born FlashCache.

FlashCahce provides a secondary read cache for hot blocks of data. This proves a way to separate performance from spindle count,  and thus not only allows workloads intended for Fiber Channel or SAS drives to potentially run on SATA drives, but it also addresses some of the performance issues with the storage efficiency technologies that NetApp developed. For example, with FlashCache utilized in a virtual desktop environment Netapp de-duplication allows many individual Windows images to be represented in a very small footprint on disk. However a problem arrises when a large numer of desktops all try to access their Windows image at once. However with the addition of FlashCache, most, if not all of the Windows image would end up being storage in Flash memory, thus avoiding the performance issue of a boot storm, virus checking storm, etc. 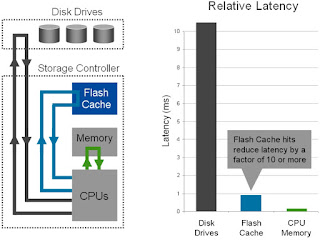 
Both EMC and Netapp have developed ways to help both improve the performance, and drive the TCO of storage downward. the two vendors approached the problem is somewhat different ways, but in the end they have both solved the problem in unique and effective ways.

The NetApp technology requires that the user buy-in completely to the NetApp vision of storage efficiency. If the user ignores the advantages of de-dupication in particular, or has data or workloads  that simply don't allow for the application of the NetApp storage efficiency technology then the TCO saving that NetApp promises will not be achieved. Utilizing FlashCache to seperate performance from spindle count is also critical in maintaining the performance of the array. This separation of performance from spindle count also in and of itself drives dwn the number ofd drives needed to support a workload, and thus also drives down the TCO.

The EMC technology requires a very good understanding of your application workloads, and careful planning and sizing of the different tiers of storage. EMC could do more to make the two sub-products work together so that a single solution could provide both the TCO and the performance improvements at the same time. However, EMC FAST is a product that provides the TCO improvement promised, and doe it with a clean and elegant solution.

Finally, a little on the future. With the cost of Flash memory coming down 50% year over year, it will soon reach the same price point that we currently see 15K HDD's at. Once that happens one has to wonder what role 15K HHDs will fill? If 15K HDDs are, indeed, squeezed out of existence by this reduction in the price of Flash memory, what purpose will 3 tiered automated storage tiering fill? Or, will the future simply be 2 tiers of storage, one that provides bulk capacity, and one that accelerates the performance of this bult capacity? if that predication is correct, then FAST VP will have a limited life, and FAST Cache and FlashCache will be the longer surviving technology.
Posted by Joerg Hallbauer at 10:51 PM

Disclaimer I work for NetApp,

Raid DP on independent testing is 90% the same as Raid 10 so saying that flash cache was needed to overcome performance is incorrect.
Also ( Vender XYZ ) will have the same boot storm problem it has nothing what so ever to do with deduplication. NetApp is the only vender to use cache on first read all others have timer/ frequency basted caching on a boot storm this requires a very long warm up period.
Disclaimer 2 I use to also work for other companies with Automated tearing solutions.
In a boot storm the movement of data from FC/SAS will only lower the performance of the array while the huge numbers of VM/s get copied out to higher speed disks…

Nice write-up. Thanks for the info.

Wow what a nice post i am really so inspired here could you more share here i will be back to you as soon as possible keep continue sharing.
Thanks